Players registered at PokerStars Casino can currently play for a staggering $143,000+ jackpot on one of the website’s newest casino slot games, Dragon’s Luck.

Developed by Red Tiger Gaming, the slot boasts an Asian theme, based in a classic Chinese temple. As with many of the other slots in the Red Tiger portfolio and on the PokerStars Casino site, it offers a highly intuitive, slick design that looks just as good on smartphone and tablet devices as it does on desktop, along with a host of in-game features.

As one of the newest slots available to PokerStars Casino players, the Mega Fortune jackpot currently stands at $143,298.14 and rising – a perfect excuse to sign up and become a part of PokerStars’ growing Casino site, with its highly-rewarding VIP Club and regular promotions.
Dragon’s Luck is a five-reel, 10 payline slot, which features large 3×3 symbols and fire-breathing dragons that you won’t actually want to run away from as they can transform your symbols into more lucrative payouts!

It caters for both low and high rollers, with the ability to spin from just 20p up to £500 per spin.
Along with the typical low-value A to 10 playing cards, the game uses cards featuring water lilies, koi carp, Chinese dolls and a 138 coin – if you see a minimum of three 138 coins in a single spin you will win a minimum of 200 coins. Should you see all five 138 coins in a single spin, you’ll win 1,380 times your initial stake!

The in-game extras are really good fun. We’ve already mentioned the fire-breathing dragons that cling to the sides of the temple. They will sporadically leap into life during random spins, changing a number of the symbols on the playing cards into matching ones by breathing fire onto them, resulting in another whopping pay-out.

In some cases, casino slots developed by Red Tiger tend to be difficult to reach the bonus trigger stage, but that doesn’t appear to be the case with Dragon’s Luck. After a solid spell of playing the game ourselves, we found that the dragons regularly leapt off the temple to torch those symbols in your favour!

Dragon’s Luck doesn’t feature any musical soundtrack throughout, although during each spin you are treated to a highly authentic piece of Far East music, including the longing thwomp of a traditional Chinese gong.

One thing to bear in mind is that Dragon’s Luck does not offer free spins as part of any of its bonus rounds, which may disappoint some readers. Nevertheless, it is a really enjoyable video slot with solid gameplay.

PokerStars Casino players who prefer playing games that offer the potential for free spins needn’t worry as there are dozens of other video slots on their site that will tickle your fancy.

PokerStars Casino are currently offering a 200% matched deposit bonus for all new customers signing up today, up to $400. Simply use the sign-up bonus code ‘CASINO’ in order to activate your bonus and put your free money towards attempting to win one of these enormous jackpots up for grabs! 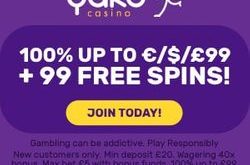